Portrait of lead singer Anthony Ingracia performing at the Orris for Stone in Love in 2021. 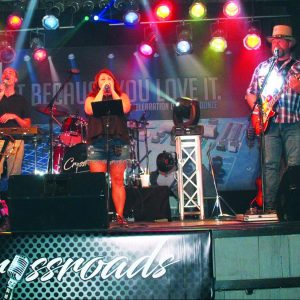 “Portrait is a faithful and powerful presentation of Kansas music,” according to the band’s website. “Focusing on the band’s most famous music, hits and deep cuts. Portrait uses correct instrumentation, superb musicianship, strong harmonies and an accurate presentation of the musical genius Kansas brought to the world.

Lead singer Anthony Ingracia is a veteran of the 2021 musical series, along with fellow Kansas tribute band Stone in Love. Harold Draper, who manages the Hammond organ for Portrait, also does keyboards for Silver Bullet STL, the Bob Seger tribute band returning for a second appearance in the Summer Music Series this year.

James Comparato, the other vocalist and lead guitarist, said the band knew Ste. Genevieve and the Orris.

“Tony loves playing there,” he told the Herald“I played there before, years ago, with Pepperland, which was a tribute to the Beetles. We love the venue. A number of the band’s players have played there in different bands.

The group formed in 2017 and operates in the Saint-Louis area.

“Most of us have been to your lovely venue and played a show there,” he said. “We are looking forward to it. This is the first time that Portrait will be in the room.

Comparato has loved the enthusiastic crowds that have attended the event in the past.

“What I remember well from playing in your venue is that you have a very attentive, music-loving crowd,” he said. “It’s very different from playing in a big club where a lot of people are drinking. It feels like people are there for the music and the show, which is a blessing.

Brett Yormark was elevated to COO of Roc Nation, Compant CEO Desiree Perez announced this week. Yormark previously served as co-CEO of Roc Nation Unified and president of business operations and strategy. According to the announcement, Yormark will provide leadership and strategic vision across Roc Nation’s verticals while continuing to develop and execute long-term organizational […]