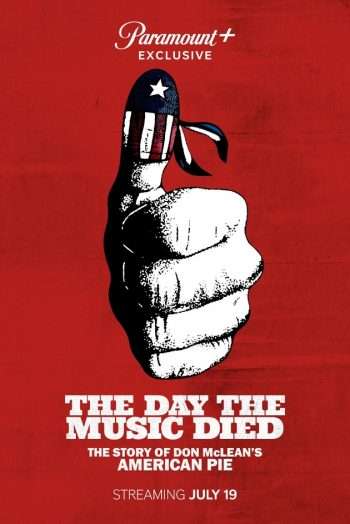 Paramount+ has announced that THE DAY THE MUSIC DIED: THE STORY OF DON MCLEAN’S “AMERICAN PIE” will premiere exclusively on the service tuesday july 19, both in the United States and abroad where the service is available. Additionally, the documentary will have a special Academy qualifying run in New York and Los Angeles starting July 8 and will be screened at Showcase Cinemas and Associated Theaters around the world on July 14 and 17.

With a deeper narrative than a catchy melody and enigmatic verses, “American Pie” is a musical phenomenon deeply rooted in the history of American culture, entertaining audiences around the world for over 50 years. In THE DAY THE MUSIC DIED: THE STORY OF DON MCLEAN’S “AMERICAN PIE,” McLean will powerfully reveal and share the secrets of his iconic song for the first time. Additionally, the documentary highlights cultural moments in America’s history that are as relevant today as they were in 1971, when the song was released. The film tells the stories of the people who have been part of this moment from the beginning and shows the perspective of a new generation of artists who are driven by the same values ​​and ideas that inspired the creation of the song.

“This documentary is something that will make people think, especially since so many people over the years have asked me what certain lyrics meant or who I was referring to, but now I can finally solve many of those mysteries,” says McLean. “Everyone from Madonna to Garth Brooks to Weird Al Yankovic recorded ‘American Pie’ and made it their own. So many people have their own take on the song, and I love it.

“Not only is ‘American Pie’ one of the most universally known songs of all time, but it also represents an important piece of musical history and a pivotal moment in American culture. It’s a story that must be told and we’re thrilled that THE DAY THE MUSIC DIED is taking fans deeper into the making of the song, finally ending the speculation behind its lyrics and hearing from today’s biggest artists – both legends and future stars – who he personally influenced,” said Bruce Gillmer, President of Music, Music Talent, Programming and Events at Paramount, and Director of Music Content at Paramount+. “A global sensation deserves a global launch and we are thrilled to add this film to Paramount+’s unparalleled portfolio of premium music content.”

“There are interactions with all kinds of people from many walks of life, including major celebrities, music icons, current top artists and industry leaders,” Proffer said. “The film explores what ‘American Pie’ meant to people then, what it means to them now, and what it will mean to future generations.”

Biffy Clyro has announced the release of a music documentary titled Biffy Clyro: Cultural Sons of Scotlandabout the making of their ninth studio album, The myth of happiness forever. Created in partnership with Amazon Music and Warner Records, the film will be available exclusively on Amazon Music Unlimited and Amazon Prime Video starting February 25. […]

Ken Burns has a new story to tell. The man who is arguably one of the most successful and well-known documentary filmmakers has turned to country music. And starting in September, it will tell the story through an eight-part series of how the raw and simple music of rural America evolved into an entertainment industry […]