“Music, sounds and flavors. The air is thick – not just with humidity.” Sony Classics has unveiled the first official trailer for Jazz Fest: A History of New Orleans, a documentary about the iconic New Orleans Jazz & Heritage Festival. It premieres at the 2022 SXSW Film Festival – which kicks off this weekend. A film that not only captures the iconic annual musical and cultural event that has been called America’s greatest festival in all its beauty and glory, but also delves deep into the rich culture of The Big Easy. Co-directed by Frank Marshall, Jazz Fest: A History of New Orleans weaves together live performances and interviews from the 50th anniversary of the iconic festival, featuring some of the biggest names in the music industry, as well as a wealth of archival documentary footage from the past half-century. Featuring appearances from Bruce Springsteen, Jimmy Buffett, Katy Perry, Earth, Wind & Fire and more. Yeah that looks wonderful! A celebration of New Orleans music, jazz, good vibes and culture. I want to go! “There is soul in this town.” 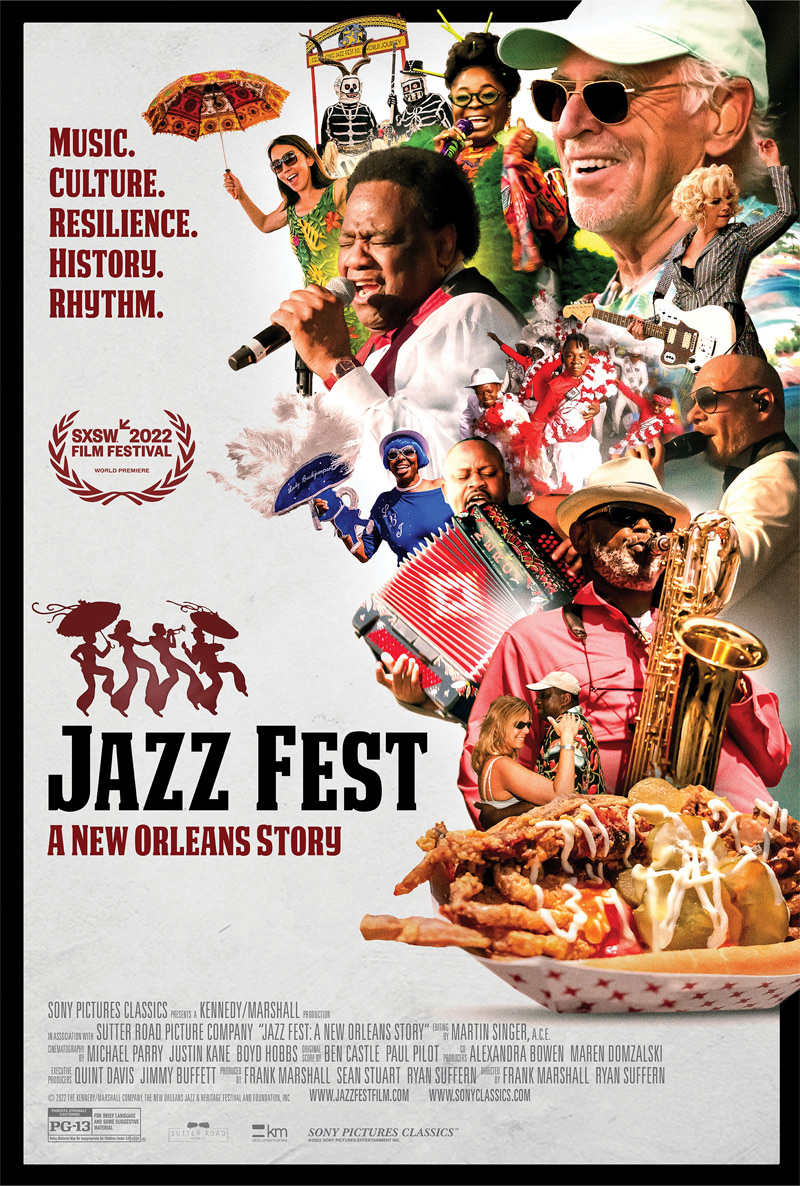 The New Orleans Jazz & Heritage Festival presented by Shell, aka “Jazz Fest”, is the city’s signature annual music and cultural event and has been called America’s largest festival. Celebrating music, food, arts and crafts from across Louisiana since 1970, jazz festival is an essential showcase of the rich heritage of the region, and hundreds of thousands of people attend the event each year. Local musical heroes are joined on 14 stages by some of the most important figures in entertainment, highlighting the connections between Louisiana culture and the world. Jazz Fest: A History of New Orleans is directed by acclaimed documentary filmmakers Frank Marshall (The Bee Gees: How to mend a broken heart, Carole King & James Taylor: Just Call My Name) & ryan suffern (Out and around, In search of Oscar). The film premieres at the 2022 SXSW Film Festival this month. Sony Pictures Classics will then be released on Jazz Fest: A History of New Orleans doc in select US theaters beginning a little later in spring 2022. Your thoughts? Are you digging?

Score: A Film Score Documentary Has No Theme – Films & TV

SCORE: A FILM MUSIC DOCUMENTARY “Hey! You! You with the vuvuzela! GET OUT.” Of all the pieces that must fit together such for a film to have even one hope of work, the element that comes closest to pure magic is not the visual effects. Nor is it the cinematography or the editing. Shit, that’s […]

If you had planned to watch one of the scripted fall TV shows in September, you may need to rethink your schedule. Ken Burns is launching his most recent project, and you won’t want to miss a minute. Country music will unveil the history of the industry it is named after, exploring in depth where […]

The delta blues, epitomized by giants like Robert Johnson and Muddy Waters, was an intensely personal moan of music. Sam Pollard’s energetic and incisive documentary “Two Trains Runnin’” shines a light on a time when this beating heart of African-American culture pointed to a curious crossroads in the civil rights movement. It tells the story […]