It is the first time after 2 years that the young monstas come home with a Music Bank Musical Show Trophy!

MONSTA X continues their winning streak with the 3rd win on a music show for the final title track, “Rush Hour”.

On November 26, MONSTA X faced off against TWICE for Trophy of the Week on KBS 2TV The Music Bank. With a total score of 4057, MONSTA X won the first place. 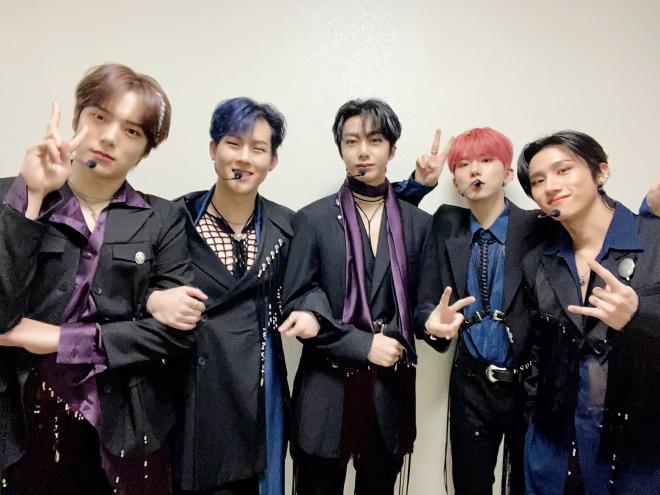 In particular, the flagship group received a score of 54 for digital, 723 for broadcast score, 3280 for physical album sales and 0 for the viewers committee score. The Viewers Committee score is not valid for MONSTA X as they are only in their first week of promotions.

However, despite the score received from the viewers committee, MONSTA X still managed to clinch the trophy for the music show. It was dramatically their first The Music Bank win after about two years and eight months with “Alligator”, the title song of the Take.2 We are here album.

Remembering this precious day, MONSTA X expressed its gratitude to their beloved fans, MONBEBE. “It’s been a long time since we last won first place on Music Bank. Now that we are experiencing a lot of amazing things thanks to MONBEBE, we are very happy.

Of course, the members’ strong love for their fandom will always be expressed, shown as they all cried out together, “I love you, MONBEBE.”

Additionally, Hyungwon thanked MONBEBE for his love which brought warmth to the cold winter.

Meanwhile, MONSTA X’s music video for “Rush Hour” has now surpassed 17 million views on YouTube since its release on November 19 at 2:00 p.m. KST. The 10th mini-album, Without limits, vividly presents the characteristic dynamic of the members that aims to show off their unparalleled presence in the K-Pop scene that is beyond limits. Additionally, MONSTA X plans to continue its album promotions before flying to the United States for the Jingle Ball Tour.

Indonesian Gamelan music show with US debut of 5 new compositions

Photo by Brendan Bannon I must say that I am fascinated by this new movement of gamelan music in Buffalo. Maybe it’s because I’ve been following the epic adventure of Matt Dunning (Artistic Director, Gamelan Sari Raras Irama), since his return to Buffalo in 2013. Rarely do I meet someone who is not only passionate […]