MONSTA X continues their promotions for the 11th mini album with a second win for the title track, “LOVE.”

On May 6, Minhyuk, Kihyun, Hyungwon, Joohoney and IM came together to honor the The Music Bank stage with a comeback performance that certainly impressed all viewers with their excellence. In particular, Kihyun and Hyungwon’s outfits garnered huge attention, with their hard-earned physique captivating the audience during the performance.

The excitement increased when The Music BankThe best song of was announced for the first week of May. MONSTA X successfully holds the No. 1 trophy in their arms for the recent masterpiece, “LOVE.” 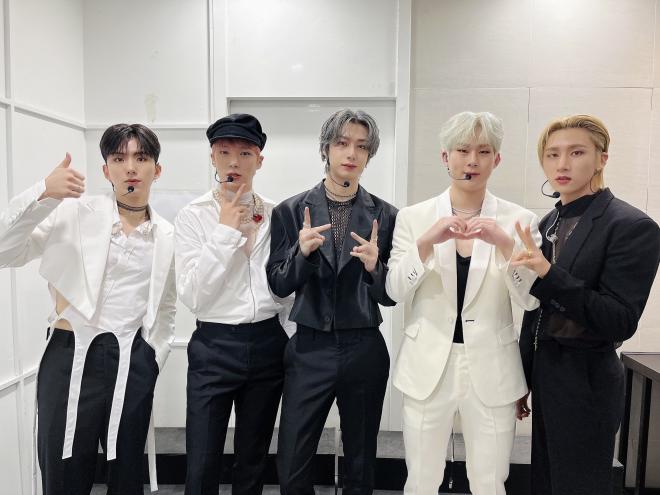 Winning against (G)I-DLE’s Miyeon, who recently made her debut as a soloist, MONSTA X received a total score of 8,499.

A huge surprise was visible in the expressions of the members as soon as the results came in. Specifically, Joohoney expressed his gratitude to fans and highlighted how LOVE FORM was made especially for MONBEBE. “I’m really grateful to have won first place with the song I worked on. I’m honored to win first place with all my members and, of course, MONBEBE.

Hyungwon also took to the mic to express his emotions about the No. 1 spot. “It’s a meaningful day that we are able to claim first place in the presence of our fans. I will do my best for the rest of our promotions, and I am also grateful to the staff who always work hard for us in behind the scenes.

MONSTA X then kicked off the encore stage by expressing the members’ love for the fans, shouting out their signature chant, “We love you, MONBEBE!”

Meanwhile, MONSTA X recently released their 11th mini-album, LOVE FORM, on April 26 at 6 p.m. KST. Led by the track “LOVE”, the new album consists of six songs which are all participated by the production line, Hyungwon, Joohoney and IM

Cerys Matthews will present a new music show for BBC Radio 4 as part of expanded arts programming, which will also see a longer airtime for Front Row. dd To Playlist will be hosted by broadcaster and singer Matthews, along with writer, teacher and broadcaster Jeffrey Boakye. The station has announced three new arts programs, […]

Former Girls Aloud star Cheryl has announced a new show she will host on BBC Sounds dedicated to her love for the R&B music genre. The 12-episode show series will see Cheryl perform music from TLC to Beyoncé while recalling stories from her youth as she developed her love for music. Her new BBC Sounds […]

Dr. Dre would help Apple Music expand into the world of original video programming with a new series called Vital signswith the Compton rapper as executive producer and star of the six-episode series. According The Hollywood Reporterevery episode of the dark, semi-autobiographical Vital signs plunges into one of the emotions of the rapper. film on […]